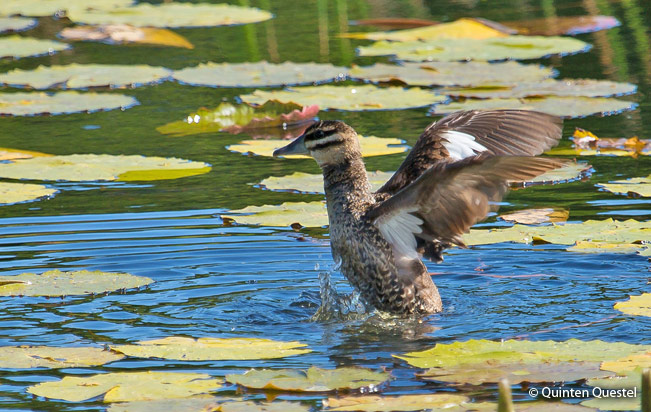 Identification & Behavior: ~32.5 cm (12.7 in). The male Masked Duck is red-brown with black specks and scales on the back and sides. It has a distinctive black mask. The female and juveniles have a barred brownish-gray body, with two horizontal dark stripes running through the face. It favors wetlands and ponds with vegetation. The Masked Duck does not generally overlap with the similar and closely related Ruddy Duck, but both species could potentially be found in coastal wetlands.

Status: The Masked Duck is widespread in Amazonia where is rare to uncommon in bodies of water with floating vegetation. It is also a rare visitor or may be resident on the coast of northern Peru.

Meaning of Name: Nomonyx: Gr. Nomao= own, one that has and Onux= nail. dominica: originating from the Caribbean region of Hispaniola and the Dominican Republic.