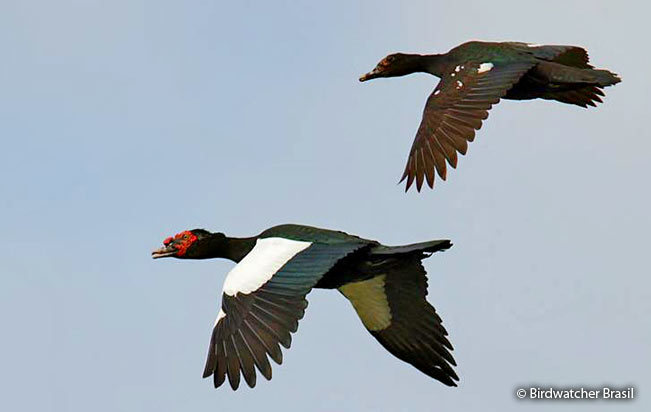 Identification & Behavior: ~80 cm (31.4 in). The muscovy duck is all black with iridescent green feathers. The adult (both sexes) shows a large white area above and below the wing. The juvenile is all black and acquires the white wing areas with age. The lumps of bare skin on the face and crest areas increase with age and turn red and more prominent in older males. The muscovy duck is similar to the Comb Duck, but is distinguished by the large white wing areas, black neck, and the bright red and black bare skin on the head. These two ducks have limited range overlap.

Status: Uncommon and widely distributed in Amazonia where it is mostly found in oxbow lakes.

Meaning of Name: Cairina:  Cairo, originating in this city of Egypt. moschata: L. moschi= referring to or originating from Moscow, Russia.  A mistaken place of origin. Muscovy Ducks were thought to originate in the Cities of Cairo and Russia. They are actually native to South America.