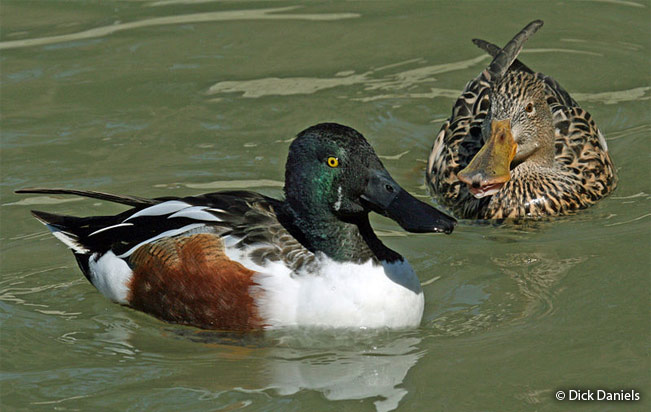 Identification & Behavior: ~48 cm (19 in).  The breeding male Northern Shoveler has an iridescent dark green head, white breast, and chestnut belly and flanks. The female is brown heavily mottled/scaled with black. Both sexes have a large patch of blue on the upper wing, which is more saturated on the male. Both sexes also have a diagnostic large spatula-shaped bill, which is dark in the male, and orange and dusky on the female. The female Northern Shoveler is distinguished from the similar female Cinnamon Teal by larger size, and a long broad bill.

Status: The status of the Northern Shoveler in Peru is unknown. Two single birds in separate occassions have been photographed in the Ventanilla Wetlands outside the city of Lima.

Meaning of Name: Spatula: L. Spoon. clypeata: L. Shield bearing. In reference to the bill shape of a Northern Shoveler.