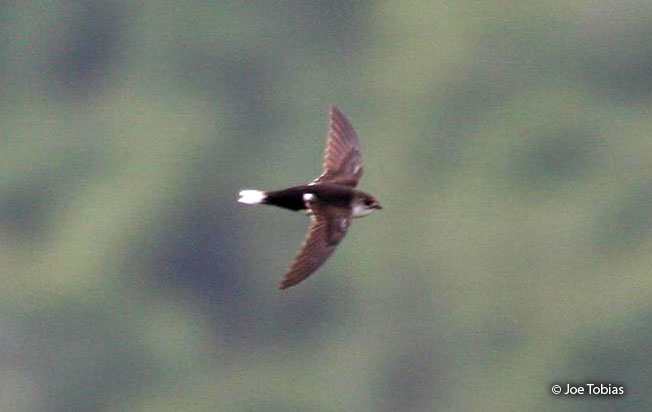 Identification & Behavior: ~12 cm (4.7 in). The male White-tipped Swift is mostly black with a white throat and sides of the neck, and upper breast. It has a characteristic white band across the lower belly, and white tail tips. The female is similar but has a dark gray plumage instead of black. The tail is notched in both sexes. It is similar to the Lesser Swallow-tailed Swift but is distinguished by ranging at higher elevations on the east slope of the Andes, white tips on the notched tail, and the white band across the lower belly. These two species may only have a limited overlap.

Status: The White-tipped Swift is uncommon in montane forests of the east slope of the Andes at elevations ranging between 1200-3000 m. It also occurs in Co, Ec, Br, and Bo.

See more of the Family Apodidae