Colors and shapes of birds are variable, but the arrangement of feathers on a bird’s body is remarkably similar across all species.  Familiarizing with the group feathers and a bird’s body parts is among the most important tool ornithologists and birders can have when trying to identify a bird by its appearance. 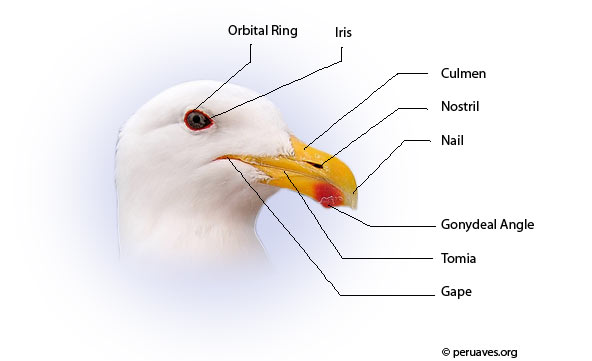 Orbital Ring: Unfeathered ring or skin around the eye. Some birds have brightly color Orbital Rings while others do not have one at all. Orbital ring can change color over time.

Iris: Refers to the colored part of the eye surrounding the pupil, which is always black. In some birds the iris color change with age.
Culmen: Refer to the ridge along the top of the upper mandible.
Nostril: Equivalent to a channel of the nose of a bird.

Nail: Tip of upper mandible. In ducks the size and coloration of the nail can be an important identification feature.
Tomia: is the cutting edge of bill.
Gonydeal Angle: Shallow angle near the tip of the lower mandible. The gonys spot is found in some adult breeding birds and is the contrastingly colored spot that the chick pecks at when it is soliciting food.
Gape: Fleshy edges at corners or the base of the beak. In most birds the gape are obvious in young individuals.

Nape: Refers to the area behind the neck.

Supraorbital Ridge: Is the boney protuberance above the eye socket; this ridge helps shade and protect the eye and gives raptors their fierce look.
Cere: Is the bare area surrounding the nostrils and can be different colos according to species, age and sex of the bird.
Chin: Is a very small area at the base of the lower mandible and can often be a good clue for the identification of certain birds.

Facial disc/Facial ruff: Facial disc is the concave collection of feathers surrounding the eyes on the face of some birds; particularly owls. The concavity of the facial disc forms a circular paraboloid that collects sound waves and directs those waves towards the ears. Harriers have less prominent facial discs and are often called Facial ruffs and refer to feathers around the neck that are raised in response to noise. Essentially enlarging the facial disc and improving hearing.

Crown: Refers to the top area of the head.
Gorget: A patch of colored or iridescent feathers found on the throat or upper breast of some species of birds, particularly hummingbirds.
Forehead: Area between the bill and the crown.
Post Ocular Spot: Feathered or skin spot found behind the eye .
Post Ocular Stripe: Stripe of feathers that project from the eye down bordering the throat or gorget in some species of hummingbird.

REST OF THE BODY

Median Crown stripe: Area that runs along the middle of the crown generally beginning at the base of the upper mandible. Lateral crown stripes, when present, run along the median crown stripe.
Eyeline: Stripe that extends from behind the eye towards the nape.
Eyering or Orbital feathers: Refers to the very small feathers circling the eye.
Mantle: Area below the nape. A distinctive group of feathers that cover the upper back and are flanked by the scapular feathers.
Scapulars: Feathers that cover the base of the wing. Scapulars flank the mantle and generally cover the bend of the wing.
Breast: Refers to the area surrounded by the bottom of the throat, the sides or bend of wing area, and the top of the belly.
Sides: Generally the area around the bend of the wing.
Flanks: Refers to the side areas below the folded wing.
Rump: Refers to the area below the mantle down to the uppertail coverts. The mantle, rump, and uppertail coverts are loosely referred as back. The rump is generally under the folded wings of a perched bird.
Vent: Refers to the area between belly and undertail coverts.
Undertail Coverts: Feathers that overlap the bottom base of the tail.
Uppertail Coverts: Feathers that cover the upper base of the tail.

Flight feathers or Remiges: Refers to the wing feathers (Primaries, Secondaries, and tertials).

Primaries: Long flight feathers growing from the hand of a wing. Primaries form the bottom of a folded wing. Most birds have ten primaries, but some sub-oscine passerines have nine.

Secondaries: Long flight feathers growing from the forearm of wing. The outer Secondaries abut the Primaries. In some ducks, the Secondaries can be brightly colored and conform the speculum.
Tail or Rectrices: Refers to the feathers that conform the tail. Tail feathers occur in even numbers with the central pair on top in the folded tail, and the outer pair positioned at the bottom of the pile.

Tertials: Refers to the feathers closest to the body and loosely cover the space between the body and the wing.
Alula: Three feathers on the thumb.
Primary Coverts: Cover the base of the Primaries.

Greater Underwing Coverts: Overlap the bases of the Secondaries.

Axilars: Feathers located in the bird’s arm pit. These feathers are basically the underwing version of the tertial feathers

Primary Underwing Coverts: Cover the base of the Primaries.

The tail feathers are called rectrices (singular: rectrix), and occur in an even number on birds. The central pair of rectrices are on top in the folded tail, while the outer pair will be positioned at the bottom of the pile.

There are three basic tail shapes, square, forked, and rounded. Other tail shapes derive from these three types.

Tail Feathers
The tail feathers are called rectrices (singular: rectrix), and occur in an even number on birds. The central pair of rectrices are on top (towards the back of the bird) in the folded tail, while the outer pair will be positioned at the bottom of the pile.

There are three basic tail shapes, square, forked, and rounded. Other tail shapes derive from these three types.