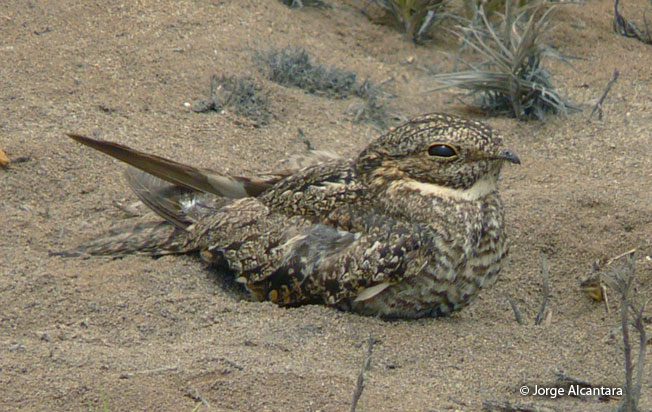 Identification & Behavior: ~21 cm (8.2 in). The Lesser Nighthawk has an intricate pattern of vermiculations, streaks, bars, and spots predominantly gray in color (male) or brownish-buff (female). The underparts are barred. The male has a white throat and white wing band, which are replaced by buff in the female. The tail is barred, relatively long, and notched. It is more often seen flying erratically right above the canopy, scrub, and houses, but also forages higher above the ground. It is the only nighthawk in most of the western side of the Andes in Peru. It is similar to the Tschudi’s Nightjar but is distinguished by having a white or buff throat, no collar, and by having the wings of the length as the tail when perched. Also, see Scrub Nightjar and Common Nighthawk.

Status: The Lesser Nighthawk is uncommon in the dry Marañon drainage, and along the western lowlands and foothills of the Andes. It also occurs in Co, Ec, Br, Bo, Ch.