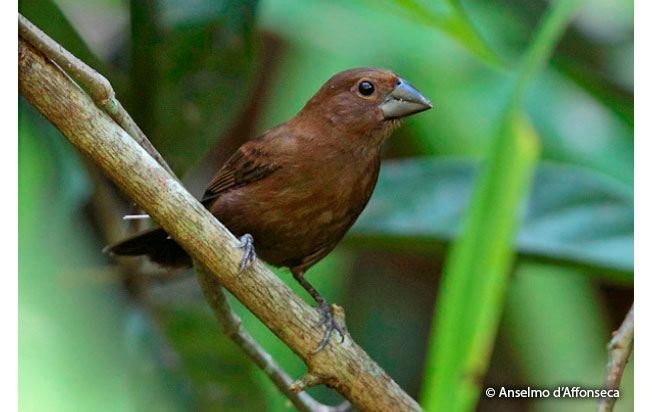 Identification & Behavior: ~16 cm (6.2 in). The male Amazonian Grosbeak is deep blue with lighter blue around the base of the bill and shoulders. The bill is very thick, blackish grading to silver at the base.  The female is uniformly chestnut-brown with a blackish bill. The Amazonian Grosbeak was formerly regarded as conspecific with the Blue-Black Grosbeak. These two grosbeaks are very similar but their ranges do not overlap.  The female Amazonian Grosbeak is similar to a female oryzyborus seed-finch such as Chestnut-bellied Seed-Finch but is distinguished by richer chestnut, thinner bill, and by being largely restricted to the understory of interior forests.

Status: The Amazonian Grosbeak is uncommon and widespread in the understory of Amazonian forests where it is known to range up to 1400 m along the foothill of the Andes.  The Blue-Black-Grosbeak also occurs in Co, Ec, Br, and Bo.

See more of the Family Cardinalidae