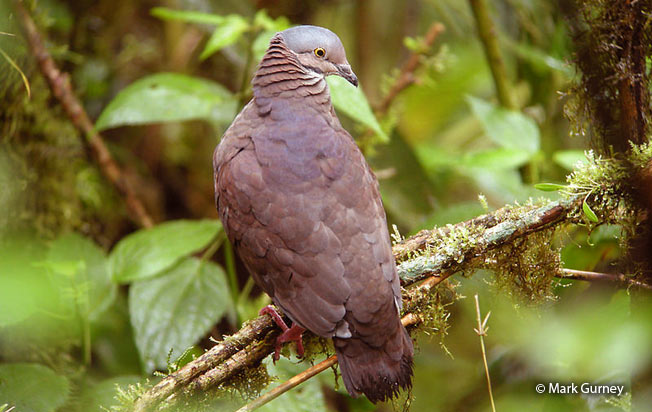 Identification & Behavior: ~31 cm (12.2 in). The White-throated Quail-Dove has a rufous-brown back and tail. The neck is scaled in shades of bluish-gray and brown. The iris is pale. The orbital skin is grayish. The bill is black. It has a distinctive rufous-pinkish cheek patch enclosed with a thin black line. It forages on the ground. It is the largest quail-dove. The size and color pattern are unmistakable, but see Ruddy Quail-Dove, which ranges at lower elevations.

Status: The White-throated Quail-Dove is uncommon to rare on the forest floor of humid montane forest within 1000-3300 m. It also occurs in Co, Ec, and Bo.

Meaning of Name: Zentrygon: Name formed from Zenaida and Geotrygon, to reflect the phylogenetic relationship with the former genus and the general form and habits long associated with quail-doves. frenata: L. Frenare= to bridle. In reference to face pattern.