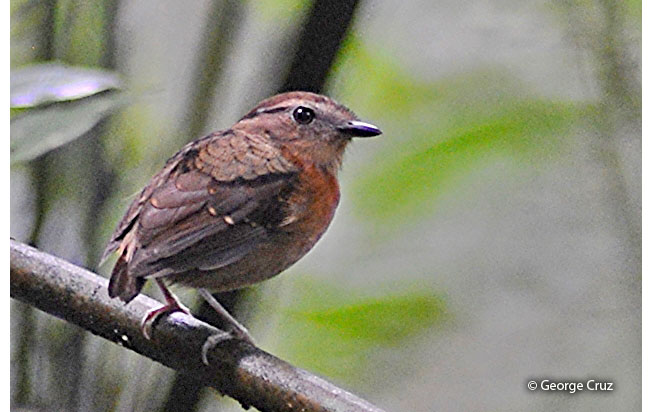 Identification & Behavior: ~11.5 cm (4.5 in). The male Ash-throated Gnateater has brown upperparts and crown. The mantle has a distinctive scaled effect. The sides of the head and breast are gray. It has a long gray and white superciliary/tuft. The female has brown upperparts also with a scaled effect on the mantle and a rufous wing bar. The long superciliary is gray and white. The breast is chestnut with a pale center of the belly. Gnateaters have a roundish body with a short tail and long legs. It forages on or near the ground in Terra Firme forest. The female is similar to a female Chestnut-belted Gnateater but has a distinctive brown scaling effect to the mantle versus a plain mantle on the female Chestnut-belted Gnateater. These two species overlap only on the east side of the Ucayali River.

Meaning of Name: Conopophaga: Gr. kōnōps, kōnōpos= gnat and phagos, phagein= eating, to eat. peruviana: Originated or associated with the country of Peru in South America.

Go to the Family Conopophagidae