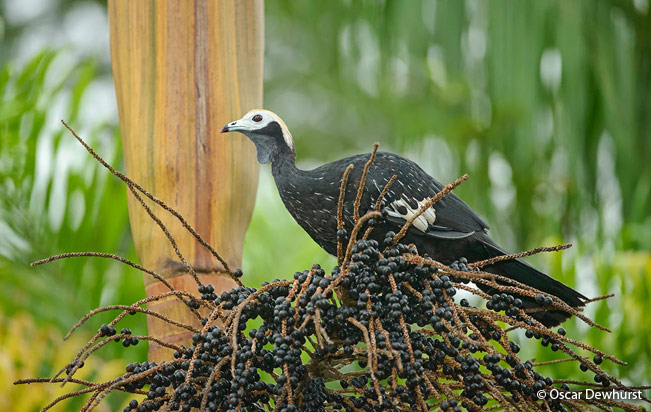 Identification & Behavior: ~71 cm (28 in). The Blue-throated  Piping-Guan is all black, with white in the wing coverts. Sexes are similar. Adult birds have pale white bare skin around the eyes and face, a bushy white crest, and red legs.  The Blue-throated Piping-Guan is highly arboreal, but descents to the ground on occasions.  They are often seen perched high on trees or flying across rivers with a characteristic sequence of strong wing beats and graceful gliding. Its unique plumage is unmistakable. Also, see Wattled Guan

Status: The Blue-throated Piping Guan is a fairly common canopy dwelling bird of tall pristine floodplain and Terra Firme forests. A bird largely restricted to the lowland Amazonia below 700 m; although has been recorded, in some locations, at elevations of up to 1100 m. They can be temporarily common around trees bearing fruit.

Meaning of Name: Pipile: L. Pipilare= to pipe or shirp. cumanensis= related or originating in Cumana, Venezuela’s capital city of the state of Sucre.

See more of the Family Cracidae