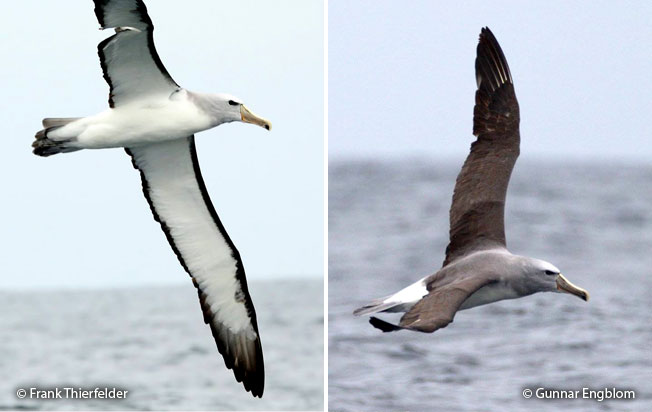 Identification & Behavior: ~95 cm (37.4 in). The adult Salvin’s Albatross has a dark brown back. The underside of the wing is white bordered by a narrow black edging on the leading and trailing edges. The head and neck are light gray, with a pale forehead. The bill is grayish with a dull yellowish ridge along the culmen and a black tip. The juvenile has a duller bill and similar underwing plumage pattern as the adult. The color pattern is very similar to that of a Buller’s Albatross but is distinguished by having a dull yellowish bill and a narrow black edging on the underwing. Also, see Gray-headed Albatross.

Status: The Salvin’s Albatross is fairly common and along with the Waved Albatross is the Albatross most likely to be seen on a pelagic trip in Peru. It also occurs in Ch.

See more of the Family Diomedeidae