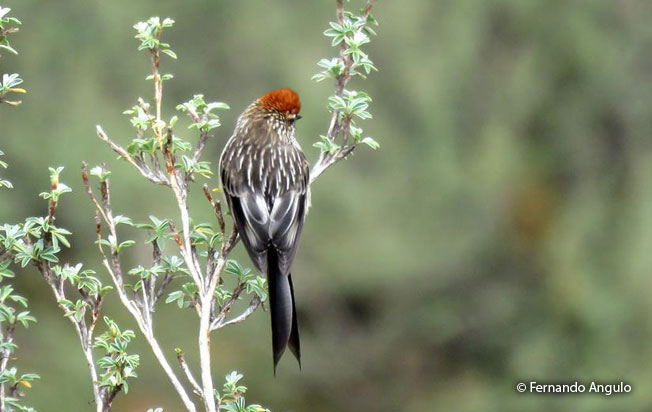 Identification & Behavior: ~16 cm (6.2 in). The White-browed Tit-Spinetail has a grayish mantle streaked with whitish. The crown is rufous in the adult and less saturated and more streaked with dusky in younger plumage stages. The throat, sides of the neck, and upper breast are pale streaked with dusky, sharply defined from the plain grayish rest of the underparts. The wing has a broad pale band. It shows no rufous on the folded wing. The tail is gray, very long, strongly graduated, and ends at a wispy fork. It forages exclusively in Polylepis woodlands and associated shrubbery. It is similar to the Rusty-crowned Tit-Spinetail but their geographic ranges are not known to overlap. Also, see Andean Tit-Spinetail.

Status: Endemic. The White-browed Tit-Spinetail is very local in Polylepis woodlands in Cuzco and Apurimac at elevations ranging between 3800-4500 m. It also occurs in Co, Ec, Br, and Bo.