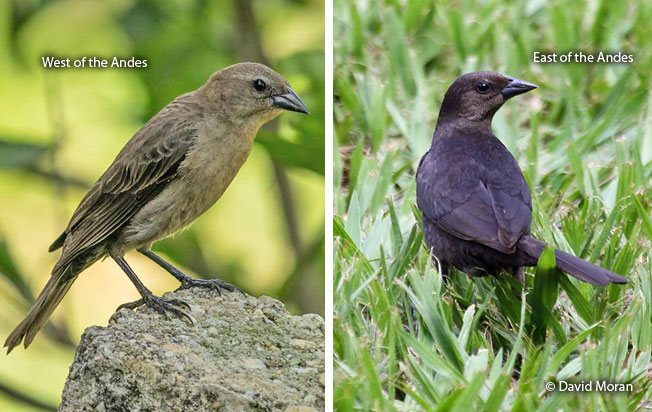 Identification & Behavior: ~20 cm (8 in). The male Shiny Cowbird is glossy purplish black.  The bill is black and cone-shaped. The female is gray-brown overall with fine dusky streaks on the underparts (occidentalis) or dusky overall (riparius). The juveniles are similar to a female. Young males are mottled black and gray-brown as they attain the adult plumage.  The male is very similar to a Scrub Blackbird but is smaller, more slender, and has a more glossy purplish black to its plumage. The female is similar to a female House Sparrow but is larger and has a thicker black bill.

Status: The Shiny Cowbird is common to uncommon in Amazonia. It is also common on the western lowlands and foothills west of the Andes. It also occurs in Co, Ec, Br, Bo, and Ch.