Identification & Behavior: ~15 cm (6 cm). The Paramo Pipit has tawny upperparts streaked and mottled with dusky. The underparts are lighter tawny with dusky streaking restricted to the breast. The tail is brownish with white outer tail feathers. The legs are pink. It forages on open areas with wet grass and shrubs near the tree line. It is similar to the Hellmayr’s Pipit but is distinguished by and overall tawny plumage and dusky streaking largely restricted to the breast and by having white outer tail feathers (gray tail in Hellmyr’s Pipit). Also, see Correndera Pipit.

Status: The Paramo Pipit is uncommon in humid grasslands near the tree line on the east slope of the Andes at elevations ranging between 2950– 4400 m. It also occurs in Co, Ec, and Bo.

Meaning of Name: Anthus: Gr. Myth. Anthos= small, brightly colored bird mentioned by Aristotle. bogotensis: In early ornithology “Bogotá” was used to designate a species of unknown provenance but, from the distinctive way in which the trade-skin had been prepared, presumed to be from the Spanish Main (= Spanish-held Mainland), the hinterland of north-western tropical America.

See more of the Family Motacillidae 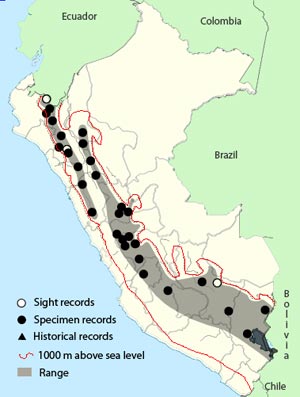