Identification & Behavior: ~27 cm (10.6 in). The Marbled Wood-Quail has a patterned plumage in shades of brown, black, and gray. The underparts appear finely barred with similar shades as upperparts. The Subspecies O. g. buckleyi (north of the Amazon) is more uniform in coloration than birds south of the Amazon, which seem to have a lighter rufous face, eyebrow, and throat. Overall, it is darker and more uniform in coloration than the similar Starred Wood-Quail. It forages on the forest floor where found in family groups.

Status: The Marbled Wood-Quail is rare to uncommon, mostly by sound, throughout its extensive range. In Peru overlaps with Starred Wood-Quail. Not known to occur in Southeastern Peru in the Manu – Tambopata areas, or perhaps overlooked.

Meaning of Name:  Odontophorus: Gr. Bearing teeth. guyanensis: related to or originating in Guyana. A thick and tooth-billed wood-quail originating from Guyana. 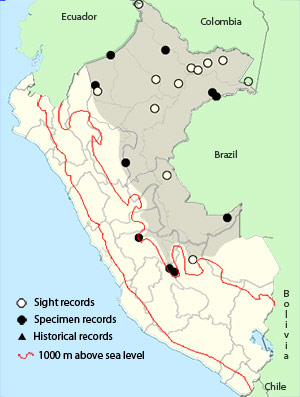