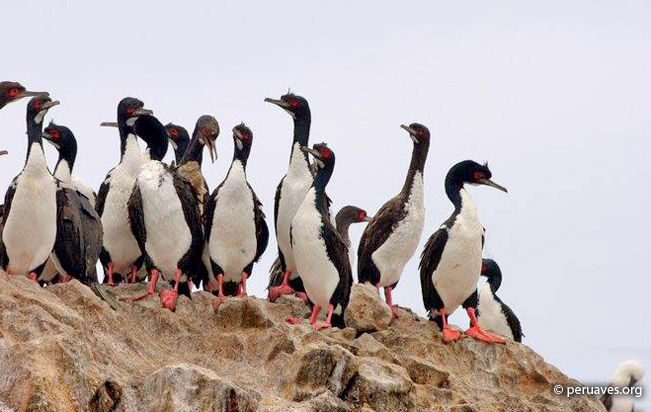 Identification & Behavior: ~78 cm (31 in). The Guanay Cormorant has black upperparts including the head and pure white underparts. It has a varying amount of bare red skin around the eyes, which becomes brighter during the breeding season. Juveniles are a dull version of the adults and lack the red bare skin in the face. The Guanay Cormorant is frequently seen in large flocks comong and going to the feeding grounds. Also, see Neotropic Cormorant and Red-legged Cormorant.

Status: The Guanay Cormorant was formerly abundant. Its population declined as a result of commercial over-fishing; although it is still common. Its main breeding colonies are mostly in Peru and Northern Chile. During the non-breeding season, it spreads further south to Chile and north to Ecuador. It also occurs in Co, Ec, and Ch.

See more of the Family Phalacrocoracidae