Identification & Behavior: ~49 cm (19.2 in). The Chestnut-fronted Macaw has a narrow chestnut forehead. The bill is black. It has well defined black lines on the bare skin on the sides of the head. The flight feathers are blue. The underside of the wing and tail feathers are red; noticeable in flight. It is one of the three medium-sized macaws. See, Red-bellied Macaw.

Status: The Chestnut-fronted Macaw is widespread and fairly common in Amazonia. It is known to range at elevations of up to 1000 m along the foothill of the Andes. It also occurs in Co, Ec, Br,  and Bo. 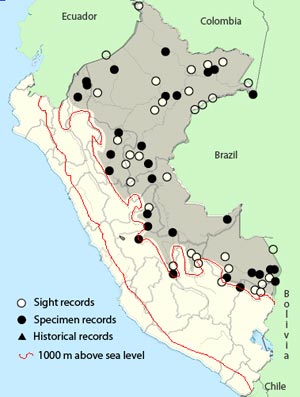