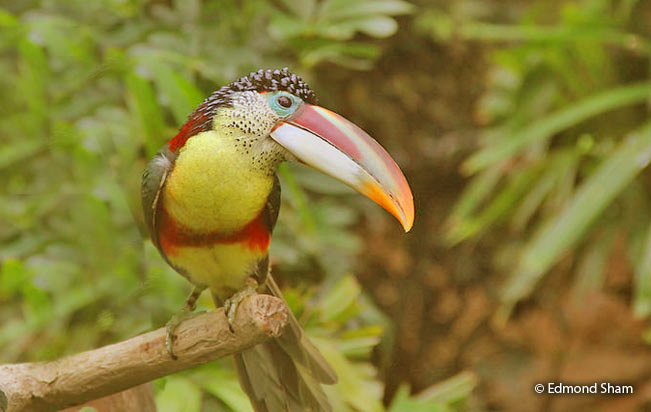 Identification & Behavior: ~44 cm (17.3 in). The Curl-crested Aracari has a black cap and nape made out of curly tape-like feathers. The throat is yellow with dusky spots. The mantle and rump are red with the rest of upperparts and tail dusky greenish.  The underparts are yellow with a distinctive red band across the mid-belly. Most of the lower mandible is creamy yellow.  The tip of the bill and upper mandible are reddish and chestnut with a greenish stripe along the upper mandible. It is similar to Chestnut-eared Aracari but is distinguished by having yellow-speckled throat and no black on bill.

Status: The Curl-crested Aracari is uncommon in the forest canopy of Amazonia, on the south side of the Amazon and lower Marañon Rivers. It is known to range up to 900 m along the foothill of the Andes. It also occurs in Br, and Bo.

See more of the Family Ramphastidae