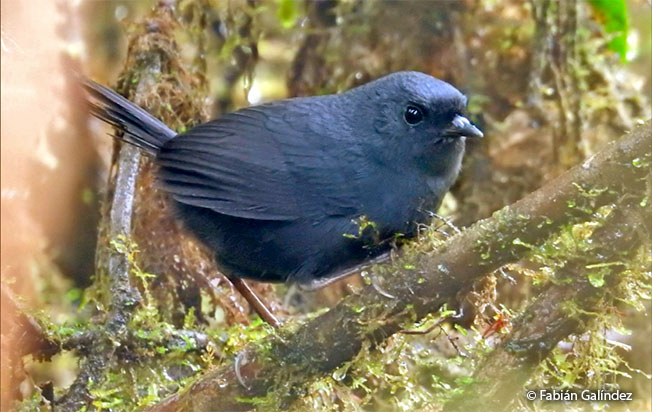 Identification & Behavior: ~11.5 cm (4.5 in). The adult Blackish Tapaculo is uniformly dusky gray. The female is lighter gray with rufous barred with black on the flanks, vent, and rump. The juvenile is dusky with brown barring. It has a relatively short tail often keep cocked. It forages in the understory of bamboo alone or in pairs. Due to their similarity and secretive habits, positive identification in the field is often impossible. However, their loud and stereotyped voice constitutes the safest way to identify them to the species level. It is more similar to Trilling Tapaculo and Tschudi’s Tapaculo.

Status: The Blackish Tapaculo is fairly common in montane forests of the east and west (Piura and Cajamarca) slopes of the Andes at elevations ranging between 1500-3200 m. It also occurs in Co and Ec.

Go to the Family Rhinocryptidae