Identification & Behavior: ~11.5 cm (4.5 in). The adult Vilcabamba Tapaculo is mouse gray with a variable amount of rufous on the flanks and rump.  The female is similar but has more rufous. The juvenile is brown with dusky barring throughout. The tail is short and often kept cocked.  It forages on or near the ground in humid montane forests, humid montane scrub, and Polylepis woodlands. Due to their secretive habits, extreme similarity among species and the generally low light in the places they inhabit, positive identification of a tapaculo in the field is often impossible. However, their loud and stereotyped songs and calls are given frequently and constitute the safest way to identify them to the species level. It is very similar to the Puna Tapaculo but their ranges do not overlap.

Status: Endemic. The Vilcabamba Tapaculo is uncommon in humid montane forests and scrub in a very small range in Cuzco at elevations ranging between 3500-4200 m.

Go to the Family Rhinocryptidae 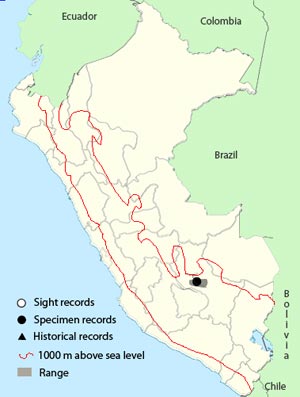