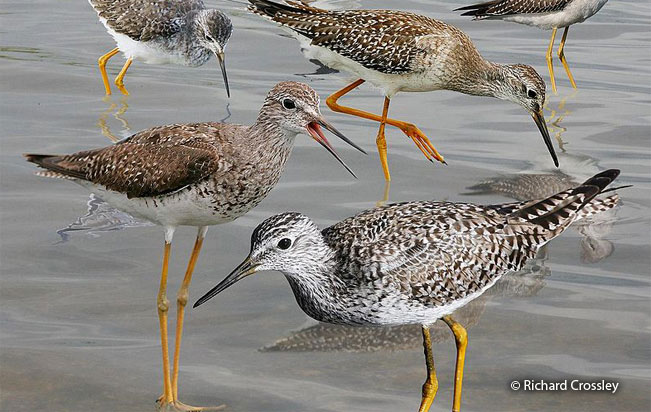 Identification & Behavior: ~25.5 cm (10 in). The Lesser Yellowlegs in basic plumage is mostly gray with a pale belly and yellow legs. The alternate plumage is darker with more accentuated specks, barring, and yellow legs. It is very similar to the Greater Yellowlegs but is distinguished by smaller size and by having a proportionally shorter, thinner, and a straight bill. Also, see Solitary Sandpiper.

Status: The Lesser Yellowlegs is a common Boreal Migrant found in a number of habitats and elevations throughout Peru. It is common during the months of September through April and rare throughout the rest of the year as some birds overwinter in South America. It also occurs in Co, Ec, Br, Bo, and Ch.

Meaning of Name: Tringa: Gr. A white wagging tail bird mentioned by Aristotle without being completely identified, but taken by later authors as a torch or wagtail. flavipes: L. flavus= yellow and pes= foot.

See more of the Family Scolopacidae