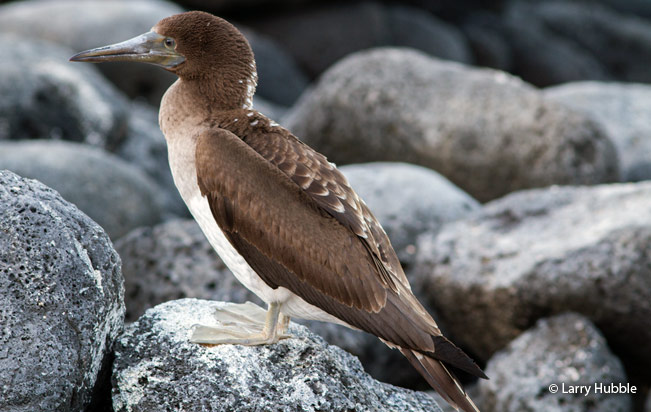 Identification & Behavior: ~81 cm (32 in). The adult Blue-footed Booby has the head and neck light brown with short pale streaks. The underparts are white. The uperparts are brown mottled white on the back, but no specks on the dark brown wings. Juveniles have a sooty gray head, neck, back, and pale underparts. The fee in adults is blue; in juveniles is gray. It is distinguished from the similar Peruvian Booby by the brown head and neck, no white specks on the wings, pale iris, and blue feet.

Status: The Blue-footed Booby is common along the coast of northern Peru where it breeds on the Islands of Lobos de Tierra and Lobos de Afuera. It ranges south mostly outside the breeding season, but it is not known to breed south of the northern islands. It also occurs in Co, Ec, and Ch.

See more of the Family Sulidae