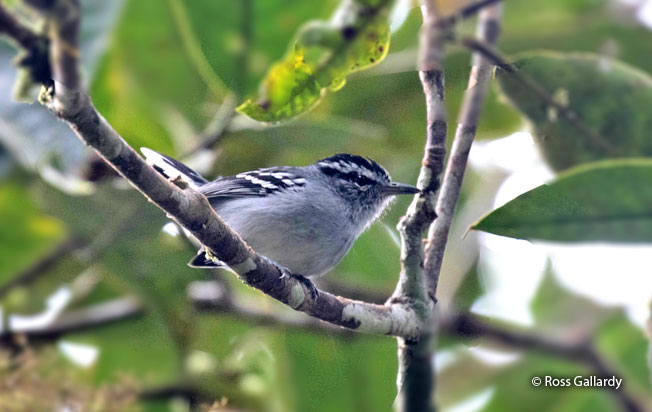 Identification & Behavior: ~12 cm (4.7 in). The male Ash-throated Antwren has a black cap bordered by a broad white supercilium. The back is gray. The wing coverts are black with two white wing bars. The underparts are grayish. The tail feathers are tipped with large white spots. The female is similar but has white streaks on the crown and yellowish on the sides of the head and breast. It forages in the canopy and sub-canopy of humid montane forest often in mixed-species flocks. It appears to be associated with forest types that grow on poor soils. It is very similar to the Creamy-bellied Antwren but their ranges do not overlap. The also similar Rufous-winged Antwren has conspicuous rufous wing panels.

Status: Endemic. The Ash-throated Antwren is uncommon and restricted to a very small range in the Rio Mayo drainage. It is known to range at elevations ranging between 1250-1450 m.

Meaning of Name: Herpsilochmus: Gr. Herpo= to creep about and lokhme= thicket, copse.
parkeri: In honor of Theodore ‘Ted’ Albert Parker III (1953-1993) US field ornithologist with unparalleled knowledge of Neotropical birds, tragically killed in an air-crash.