Identification & Behavior: ~23 cm (9 in). The male Undulated Antshrike is mostly blackish finely barred with white. It has a black cap the bird often erects. The female is rufous-brown barred with black. The female has a rufous crest. Both sexes have a yellow iris and a thick bill hooked on the tip. It forages in dense understory of the forest in Amazonia. It is very similar to the Fulvous Antshrike.  The range of these antshrikes is split by the Amazon River. Also, see Fasciated Antshrike and Bamboo Antshrike.

Status: The Undulated Antshrike is rare but widespread in Amazonia where it ranges on the south side of the Amazon River. It also occurs in Br, and Bo. 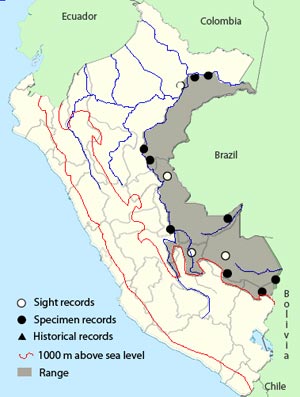