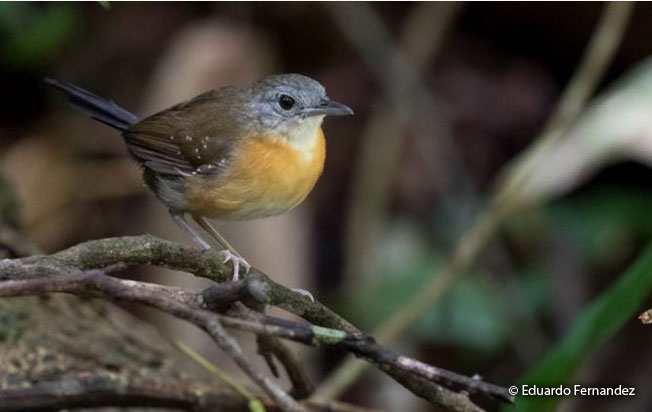 Identification & Behavior: ~14 cm (5.5 in). The male Black-throated Antbird has rufous-brown upperparts. The wing coverts are rufous brown tipped with white dots forming wing bars. The head is gray. The throat, breast, and part of the belly are black bordered by gray; but the extent of the black throat and breast is variable. The female has brown upperparts with poorly defined wing bars. The breast is bright rufous grading to gray towards the rest of the underparts. It forages in thickets and dense foliage at the edges of forest and along streams. It is similar to the Chestnut-tailed Antbird and Zimmer’s Antbird but is distinguished by larger size and habitat use in dense forest edges and second growth.

Status: The Black-throated Antbird is fairly common and widespread in Amazonia where it is known to range up to 1000 m along the east slope of the Andes. It also occurs in Co, Ec, Br, and Bo.