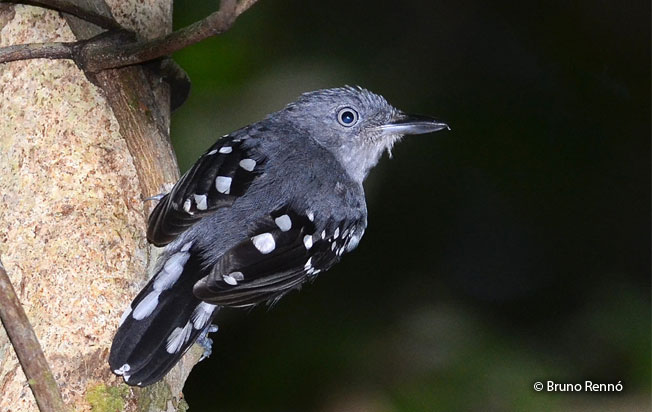 Identification & Behavior: ~13 cm (5.1 in). The male Pearly Antshrike is gray. The wing coverts and tertials are black tipped with large roundish white dots forming wing bars. The tail feathers are tipped with white. The female is rufous-brown with black wing coverts tipped with large roundish brown dots. The tail is blackish doted with brown spots. Both sexes have pale iris. It forages in the understory and midstory of the forest in Amazonia where it favors high or Terra Firme forest. The large spots on the upperparts are distinctive but see Spot-winged Antshrike.

Status: The Pearly Antshrike is uncommon in northeast Amazonia largely on the north side of the Amazon River, but ranges south of the lower Marañon River. It also occurs in Co, Ec, and Br.