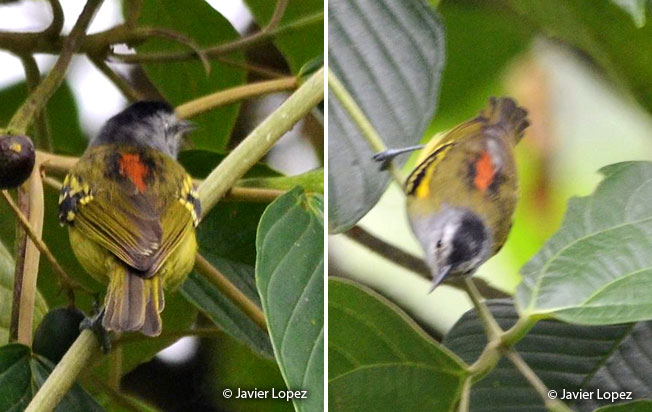 Identification & Behavior: ~11 cm (4.3 in). The male Rufous-rumped Antwren has a gray head and breast with a conspicuous black cap. The upperparts are yellow-olive with black wing coverts and two yellow wing bars. The back and rump are bright rufous but often concealed by the folded wings. The belly is yellow.  The female is a dull version of the male but has dusky wing coverts and lacks the black cap. It forages in the canopy of mature forests generally with mixed-species flocks. The long tail and active foraging behavior distinguish it from other yellow-bellied antwrens such as Pygmy Antwren and Sclater’s Antwren. It is not known to overlap with the similar and closely related Ash-winged Antwren.

Status: The Rufous-rumped Antwren is uncommon to rare in the Amazonian lowlands. It is not known to occur on the east bank of the Napo River and the north side of the Amazon River. It also occurs in Ec, Br, and Bo.