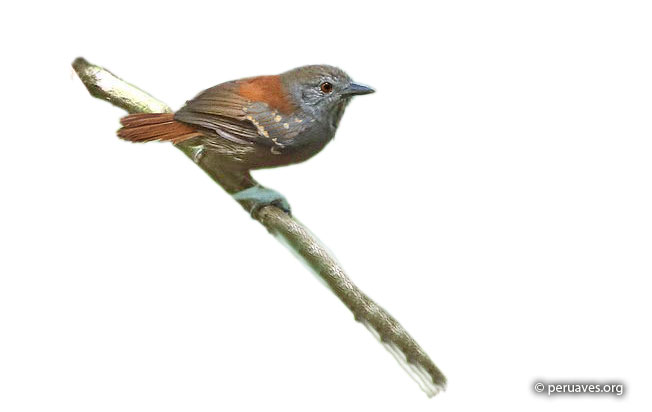 Identification & Behavior: ~11 cm (4.3 in). The male Rufous-tailed Stiplethroat has a red-rufous back (mantle). The sides of the head and rest of the underparts are gray. The throat is nearly concolor with the rest of the underparts. The wing coverts are brown with buffy-brown wing bars. The female is similar to the male, also with a red-rufous back, but has rufous-brown underparts. Both sexes have a rufous tail and reddish-brown iris. It forages in the upper understory and midstory of the forest with mixed-species flock. It is similar to the Rufous-backed Stiplethroat but is distinguished by lacking a checkered throat and by having a rufous tail.

Status: The Rufous-tailed Stiplethroat is uncommon in northern Amazonia and along the foothill of the Andes where it is known to range up to 1000 m. It also occurs in Co, Ec, and Br.