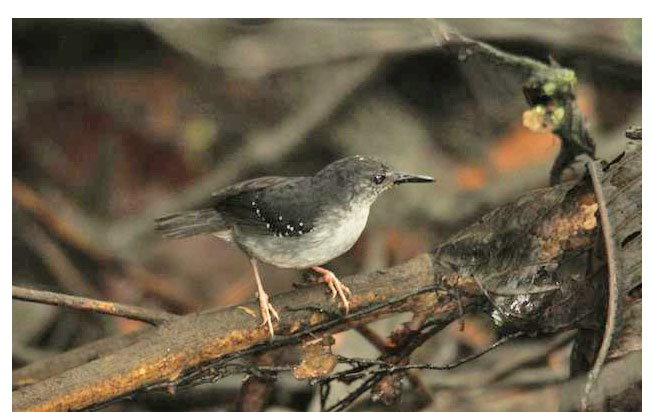 Identification & Behavior: ~14.5 cm (5.7 in). The male Silvered Antbird has gray upperparts and tail. The wing coverts have small white dots that form wing bars. The center of the underparts is white bordered by gray. The female has gray-brown upperparts with brown dotted wing bars. The underparts are white bordered by brown on the breast and belly. It forages on or near the ground along edges of lakes, streams, and swamps. It superficially resembles a female Band-tailed Antbird and Black-chinned Antbird but is larger and has a dark unmarked tail and no black throat.

Status: The Silvered Antbird is uncommon and widespread in Amazonia where it is known to range up to 600 m along the foothill of the Andes. It also occurs in Co, Ec, Br, and Bo.