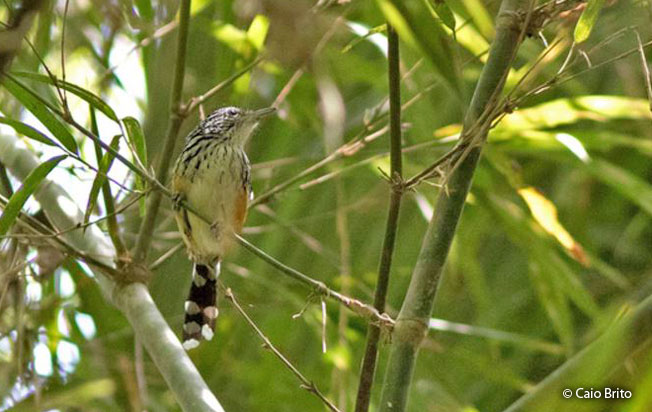 Identification & Behavior: ~14 cm (5.5 in). The male Striated Antbird has a heavily streaked black and white head, mantle, and breast. The wing coverts are black with two white wing bars. The sides of the belly and rump are rufous.  The female is similar but the black streaking is finer and has buffy instead of white. Both sexes have a heavily graduated tail with feathers tipped with large dots. It forages in the understory of the forest and is largely associated with stands of Guadua bamboo.  It is similar to the Peruvian Warbling-Antbird but is distinguished by heavy black and white streaking and a long tail. The very similar and closely related Streak-headed Antbird ranges at higher elevations and has different vocalizations.

Status: The Striated Antbird is fairly common largely in Madre de Dios and Ucayali where it is known to range up to 1300 m along the foothill of the Andes. It also occurs in Co, Ec, Br, and Bo.