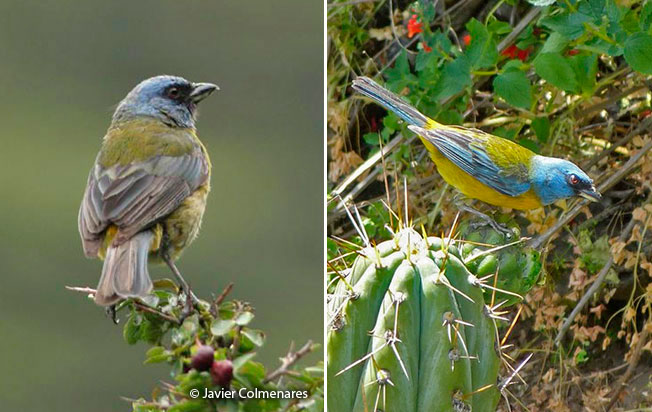 Identification & Behavior: ~17.5 cm (7 in). The adult male Blue-and-Yellow Tanager has a blue head and wings. The rest of the body is mostly yellow. Both sexes have similar plumage pattern but the female is a very dull version of the male. The juvenile is greenish brown above and yellowish below and acquires the adult colors in progressive plumage stages. It forages in scrub and forest edges alone or in pairs. It is similar to the Blue-capped Tanager, which has gray underparts and occurs at higher elevations on the east slope of the Andes.

Status: The Blue-and-Yellow Tanager is generally uncommon and widespread on the west slope of the Andes, inter-Andean valleys, and in portions of coastal lowlands. It also occurs on the humid east slope of the Andes in Southeast Peru. It generally ranges at elevations between 1500-4000 m. The Blue-and-Yellow Tanager also occurs in Co, Br, Bo, and Ch.