Identification & Behavior: ~11.5 cm (4.5 in). The male Slate-colored Seedeater is variable. Some birds are bluish-gray while others are olive-gray with and without a white patch on the sides of the neck and throat. All individuals have a white wing speculum and a thick orange bill. The female is olive-brown with a pale center of the belly, black bill, and white wing speculum. The Slate-colored Seedeater is nomadic and generally rare. It appears to track-down seeding bamboo events where it becomes temporarily common. The male is similar to a Plumbeous Seedeater but is distinguished by a thick orange bill and by being the only seedeater that is nearly restricted to interior forest habitats. In general, female Sporophila seedeaters are readily identified by the males that accompany them.

Status: The Slate-colored Seedeater ranges in the Amazonian lowlands of southeastern Peru where it reaches elevations of up to 1600 m along the foothill of the Andes. It also occurs in Co, Ec, Br, and Bo. 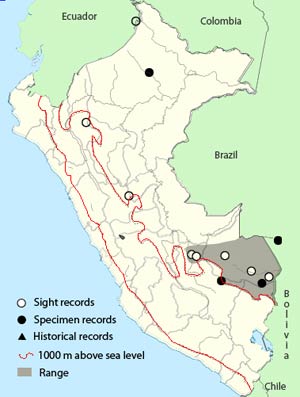