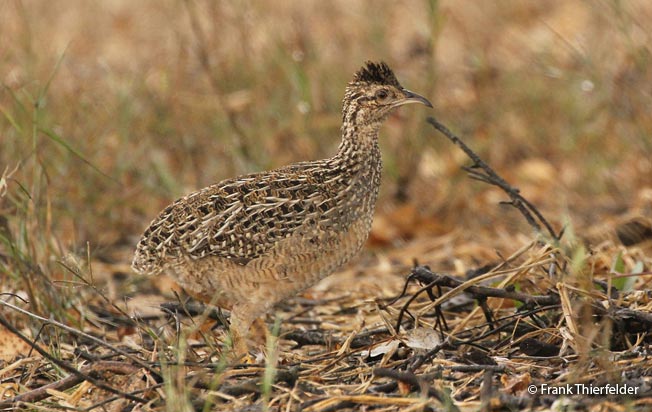 Identification & Behavior: ~28 cm (11 in). The Andean Tinamou has a curved bill with a pale lower mandible. All forms have a dusky thin stripe from behind the eye to the sides of the head. The upperparts have an intricate pattern of black and brown spots, and pale streaks. The breast is grayish (with pale spots) and grades to brown on the lower belly. It forages in various habitats types including open grasslands with shrubs, Andean scrub, and agricultural fields. It resembles the larger Ornate Tinamou, which ranges at higher elevations. It is not known to overlap with the Curve-billed Tinamou.

Status: The Andean Tinamou is the most common and widespread of Tinamous of the Andes. It generally ranges at elevations ranging between 2200-3200 m, but it also occurs in the dry deciduous forest of Northwest Peru, and near sea level in “Coastal Lomas”. It also occurs in Ec, Bo, and Ch.

Meaning of Name: Nothoprocta: Gr. Nothos= false, spurious and proktos= the tail. In reference to a short tail. pentlandii:  in honor of Joseph Barclay Pentland (1798-1973) Irish traveler, explorer, and diplomat in Bolivia.

See more of the Family Tinamidae