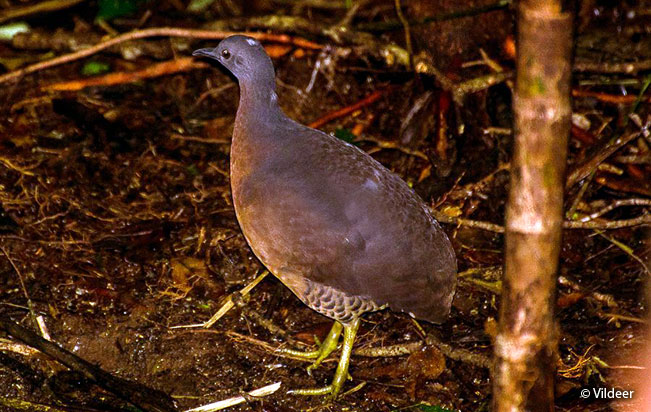 Identification & Behavior: ~26 cm (10.2 in). The Brown Tinamou has variable plumage. Birds in northern Peru have a gray head and neck and brown rest of the body. Birds in the south have a sooty gray head and upperparts and rufous-brown underparts. The iris is brown to red-brown.  The flanks and vent area are buffy with a blackish scaling effect. It is similar to the Little Tinamou, but is distinguished by being larger, and by having a blackish scaling effect on the flanks, vent, and undertail coverts areas. It is also rather similar to the Hooded Tinamou, but distinguished by being smaller and having plain brown back and wings without the vermiculation and white spots on the Hooded Tinamou.

Status: The Brown Tinamou is common in the humid montane forest of the east slope of the Andes where it ranges a elevations between 900 and 2500 m. It is also known to range at lower elevation in Madre de Dios and part of Ucayali where it is largely restricted to hilly Terra Firme forest. It also occurs in Co, Ec, Br, and Bo.

See more of the Family Tinamidae