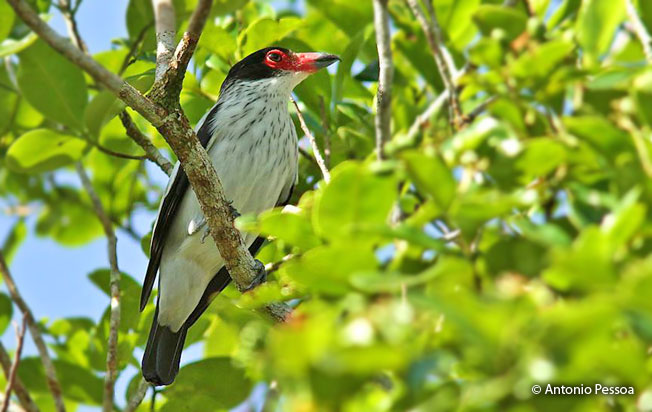 Identification & Behavior: ~20 cm (7.8 in). The male Black-tailed Tityra is mostly dingy white with a black head, wings, and tail. The female is similar to the male but has gray back streaked with dusky. The neck and breast are also streaked with dusky. Both sexes have bright red base of the bill and orbital skin. It forages in the forest canopy and forest edges. The Black-tailed Tityra is similar to the Masked Tityra but distinguished by having a black head and a solid black tail. Also, see Black-crowned Tityra.

Status: The Black-tailed Tityra is uncommon and widespread in Amazonia where it is known to range up to 700 m along the foothill of the Andes. It also occurs in Co, Ec, Br, and Bo.

Meaning of Name: Tityra: Gr Tityrus= In Greek mithology, the name of a rustic shepherd in Virgil’s Eclogues. cayana: Cayenne or French Guiana. In early ornithology “Cayenne” was often used of species of uncertain provenance presumed to be from Amazonia.