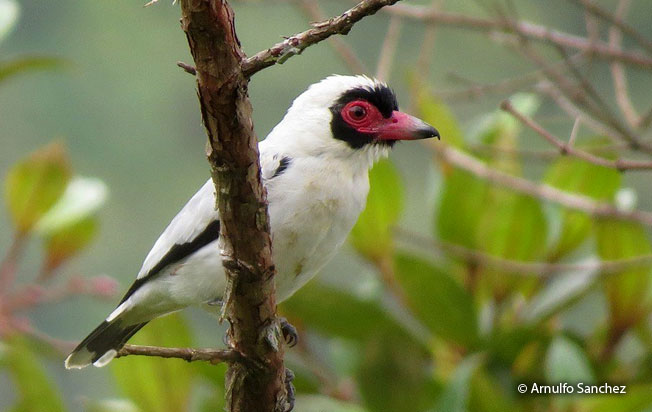 Identification & Behavior:~21.5 (8.4 in). The male Masked Tityra is mostly white with a black mask restricted to the base of the bill and around the eyes. The tail is black with white terminal tips. The female has a gray head and back, with white underparts. The tail is light gray. Both sexes have a bright red base of the bill and broad orbital skin. It forages in the forest canopy and forest edges. It is similar to the male Black-tailed Tityra but is distinguished by having black restricted to just around the base of the bill and eyes (a black mask) and by a black tail with white tips. The female is distinguished by having a gray head and back, and a gray tail. Also, see Black-crowned Tityra.

Status: The Masked Tityra is common and widespread in Amazonia where it is known to range up to 1600 m along the foothill of the Andes. It also occurs in Co, Ec, Br, and Bo.