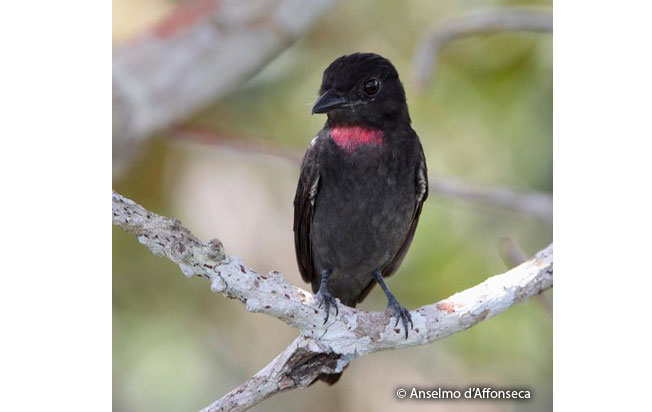 Identification & Behavior: ~17.5 cm (6.8 in). The male Pink-throated Becard is all blackish with a pink band on the lower throat. The female is cinnamon brown with a gray cap that extends toward the nape, back of the neck and mantle. The immature looks like a female. Immature males have black mottles as they acquire the adult plumage. It forages in the canopy and sub-canopy of the forest in Amazonia often in pairs. It is similar to the Crested Becard but is distinguished by darker coloration and pink throat (male). The Females is distinguished by having the gray cap extending towards the nape and mantle.

Status: The Pink-throated Becard is uncommon and widespread in Amazonia where it is known to range up to 1000 m along the foothill of the Andes. It also occurs in Co, Ec, Br, and Bo.