Identification & Behavior: ~8.5 cm (3.3 in). The male Amethyst Woodstar has  green upperparts and a broad violet gorget bordered below by a pale gray band across the breast. The rest of the underparts are green. The tail is dusky, long, and deeply forked. The female is dark green above. The throat is dusky-green with pale malar streaks. It has a pale band across the breast and mostly rufous rest of the underparts. Both sexes have white patches on the sides of the rump. The bill is black and slightly decurved. Both sexes are similar to the White-bellied Woodstar but are distinguished by being longer and more slender, having a longer tail (male), no clean white in the center of the belly, and by ranging at lower elevations.

Status: The Amethyst Woodstar is uncommon and widespread in Amazonia where it is known to range up to 1250 m along the foothill of the Andes. It also occurs in Co, Ec, Br, and Bo. 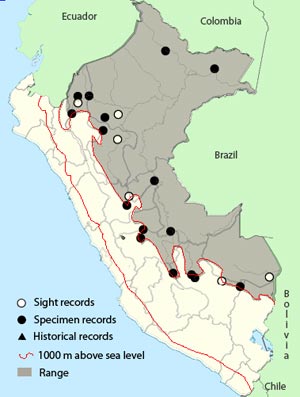