Identification & Behavior: ~9.5 cm (3.7 in). The male Black-and-White Tody-Flycatcher has solid black upperparts, head, and sides of the breast. It has yellowish markings on the middle back forming a “V”.  The throat and most of the underparts are white. The iris is dark. The bill is bicolored, black and orange. It forages in thick foliage in the under-story of the forest in Amazonia where it is associated with forest edges and treefalls. The female has yellow-green upperparts with a rufous crown and gray sides of the head and breast. The female is similar to a female White-cheeked Tody-Flycatcher but their ranges do not overlap.

Status: The Black-and-White Tody-Flycatcher is uncommon in northern Amazonia on the north side of the Amazon and the lower Marañon Rivers. An isolated population occurs in Central Peru at elevations ranging between 600-1350 m. It also occurs in Co, Ec, and Br. 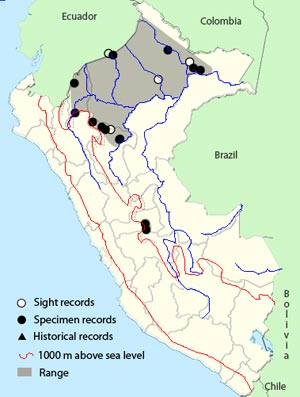