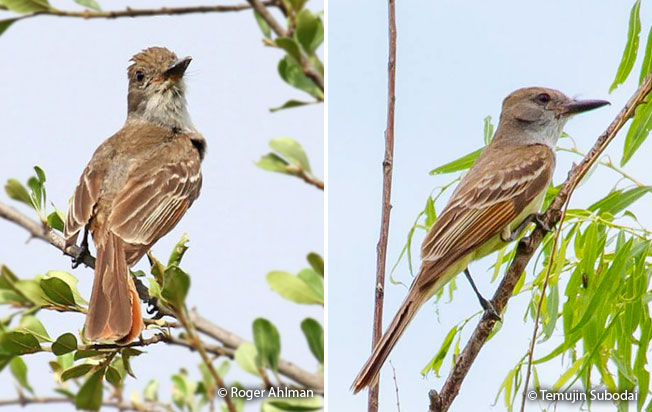 Identification & Behavior: ~20 cm (7.8 in). The Brown-crested Flycatcher has a gray mantle and wing coverts edged with brownish. The primary flight feathers and tail feathers have rufous webbing. The crown is gray with a crest. The bill is blackish with yellowish near the base of the mandible. The throat and breast are gray contrasting with yellow on the rest of the underparts. It occurs in Peru as a resident and as an Austral migrant. The resident forms forage in semi-deciduous woodlands and scrub habitats in northwest Peru and intermontane valleys. The migratory population forages in the canopy of the forest in Amazonia and in second growth. It is the only Myiorchus flycatcher with rufous on the wings and tail, but see the Great-crested Flycatcher, which is known in Peru as a rare vagrant.

Status: The Brown-crested Flycatcher is fairly common but local. It occurs in parts of the Marañon and Huallaga Rivers Drainages and the dry Urubabamba Valley. The migratory population is largely confined to Amazonian forests and second growth in Madre de Dios. It also occurs in Co, Br, and Bo.