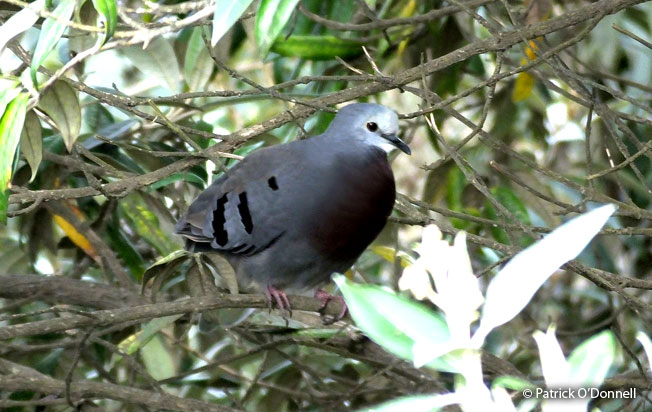 Identification & Behavior: ~22.2 cm (9 in). The male Marron-chested Ground-Dove is mostly bluish-gray with whitish forehead, cheeks, and throat. It has large black spots/bars on the wing. The breast and upper belly are maroon. The bill is gray. The tail is white except for the central pair of feathers. The flight feathers are black. The female is grayish brown with a gray tail and a broad pale terminal band. It is similar to the Blue Ground-Dove, which ranges at lower elevations and is fairly common. It is nomadic and appears to follow seeding bamboo in the Andes.

Status: The Marron-chested Ground-Dove is rare and poorly known at elevations ranging within the 1700 – 3000 m along the east slope of the Andes. It also occurs in humid forest in northwestern Peru. It also occurs in Co, Ec, and Bo.