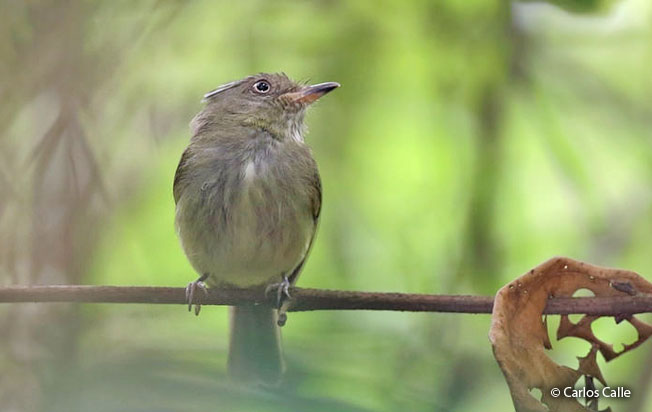 Identification & Behavior: ~10 cm (4 in). The Double-banded Pygmy-Tyrant has yellow-olive upperparts. It has a crest with black feather broadly edged with rufous-brown on birds on the south side of the Amazon and east side of the Ucayali Rivers. Bird on the north side of the Amazon and west of the Ucayali have the crested thinly edged with grayish. The wing coverts are edged with yellowish showing two wing bar. The underparts are yellowish streaked with gray. The bill is black and the iris pale. It forages in the understory of humid Terra Firme forest in Amazonia. It is similar to the closely related Helmeted Pygmy-Tyrant but is distinguished by having a more prominent crest-crown, and by having two yellowisd wing bars. It is not known to overlap with the Long-crested Pygmy-Tyrant.

Status: The Double-banded Pygmy-Tyrant is uncommon and widespread in northern Amazonia where it is known to range up to 750 m along the foothill of the Andes. It also occurs in Co, Ec, and Bo.