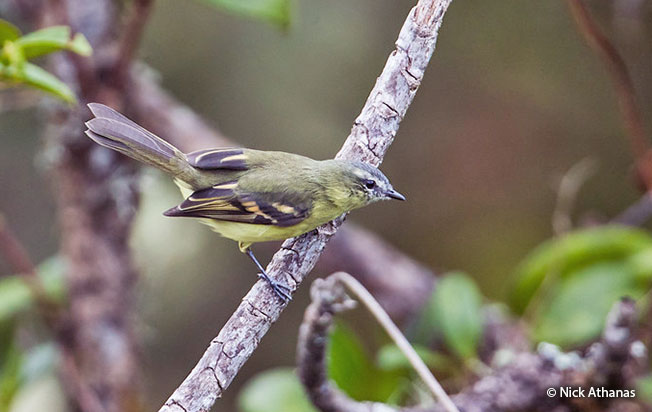 Identification & Behavior: ~11 cm (4.3 in). The Sulphur-bellied Tyrannulet has an olive-green mantle. The crown is gray bordered by a white superciliary and a black bill. The wing coverts are black with two broad buffy wing bars. The underparts are underparts.  The tail is gray. It forages in the canopy of humid montane forests often in the company of mixed species flocks. It is similar to the closely related White-tailed Tyrannulet but is distinguished by a gray tail, and by having brighter and more uniform yellow underparts. Also, see Plumbeous-crowned Tyrannnulet.

Status: The Sulphur-bellied Tyrannulet is uncommon in montane forests of the east slope of the Andes (north and south of the Marañon River) at elevations  ranging between 1600-2500 m. It also occurs in Co and Ec.