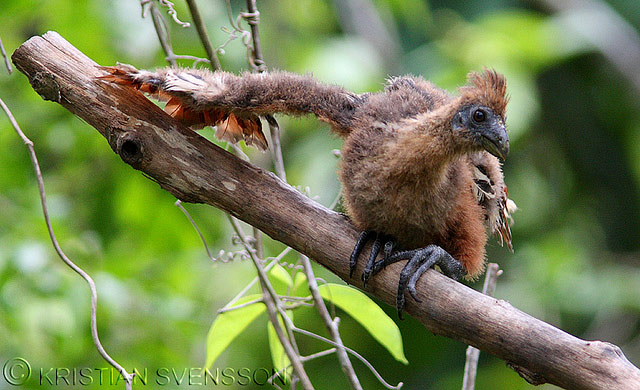 Identification & Behavior: ~67 cm (26 in). The Hoatzin is unmistakable. It has a relatively long neck and a small head with spiky rufous crest and bare blue skin in the face. It has broad and rounded wings with rufous primary flight feathers. The tail is broad, brown and tipped with terminal buff spots. It is normally seen in small flocks perched on trees or branches that overhang over oxbow lake edges. Also, see Guans and Curassows.

Status: The Hoatzin is common along lake edges in the lowlands of the Amazonian lowlands. It also occurs in Co, Ec, Br, and Bo.

Meaning of Name:  Opisthokoms:  Gr. wearing the hair long behind. Refers to the spiky crown of a Hoatzin.  hoatzin: Indian word to define a large bird.

Go to the Family Opisthocomidae