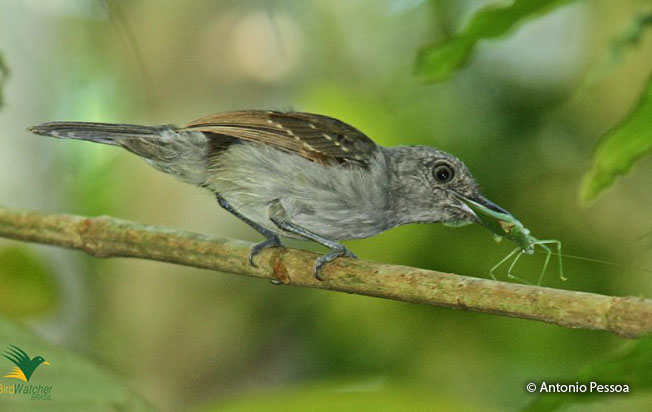 Identification & Behavior: ~14 cm (5.5 in). The male Mouse-colored Antshrike is uniformly gray. The wing coverts are narrowly tipped with white giving the impression of faint wing bars. The tail is also narrowly tipped with white. The female is olive-brown with a not very contrasting brownish cap. The wing coverts are tipped with brown. Both sexes have a light gray iris. It forages in the mid-story of mostly terra-firme forest in Amazonia almost always as part of mixed flocks. It is very similar to the Plain-winged Antshrike but is distinguished by a lighter gray plumage, faint tipping on the wing coverts and tail, and a light gray iris.

Status: The Mouse-colored Antshrike is fairly common in mostly the northern half of the Peruvian Amazon where it is known to range up to 1300 m along the east slope of the Andes. It also occurs in Co, Ec, Br, and Bo.