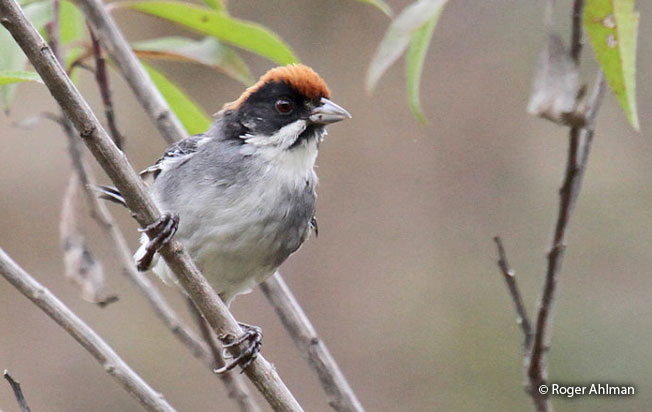 Identification & Behavior: ~19 cm (7.4 in). The Bay-headed Brush-Finch is overall gray with dusky sides of the head and a rufous crown. The throat is white with a black malar stripe and white spots on the forehead. It forages in Andean scrub, dwarf forest and the understory of forest edges. It does not have a white wing speculum. It is similar to the White-winged Brush-Finch but is distinguished by a rich rufous crown, a larger size, and lack of white wing speculum. It never shows white speckling on the head.

Status: The Bay-crowned Brush-Finch is uncommon to rare in montane scrub of the west slope of the northern Andes at elevations ranging between 1150- 2800 m. It also occurs in Ec.

Meaning of Name: Atlapetes: Gr. myth. Atlas, a Titan king who was changed into a mountain and petes= flier, to fly. seebohmi: In honor of Henry Seebohm (1832-1895) British businessman, ornithologist, zoologist, and traveler.

See more of the Family Passerellidae